In October 2020 the Eden Center and Beit Shemesh Municipality of Jerusalem, Israel organized an open, virtual event in order to raise awareness on breast cancer throughout Israel. The event was dedicated to the memory of a woman who was diagnosed with breast cancer at the age of 38. She was the mother of several children and one of her daughters, Nechama, participated in this conference to share her feeling and experience of how her mother’s illness affected the family dynamic. The English summary of her talk was done with her permission.

In 2008, a woman by the name of Avigayil, aged 38, was discovered to have cancer. This discovery was only made after she conceded to go for testing, which she had protested for so long, insisting that she was too young to be affected by such illness. Until she finally agreed to go for an examination, she had no awareness of the disease or the need for treatment. Had she waited much longer the situation would have been far worse. Avigayil lived for 10 years after the disease was discovered, and Nechama gives a very open account of what those years were like for her mother, her extended family, and, of course, for herself

Avigayil became somewhat of a “crusader” to get other women to be checked for breast cancer. She felt it was important to speak to women individually rather than in large groups. So, she took it upon herself to find a way to have personal talks. What did she talk about? Two points that she made, are the gentle balancing act between maintaining the normalcy of a routine in life and accepting the fact that more help may be needed.

Nechama points out how hard it can be to concede the need to have someone shop or cook or just help a cancer patient with mobility problems. Acknowledging the fact that neighbors and friends may have to bring in meals, for example, is part of the acceptance of the new reality. Yet, at the same time, trying to continue running a family life as best as possible, is crucial. Nechama quotes her mother as once saying that although the meals from others may not be quite like her own cooking, the fact that she was relieved of this task, allowed her to preserve her strength to continue to be a mother. Fulfilling her role as a mother was of utmost importance to Avigayil. 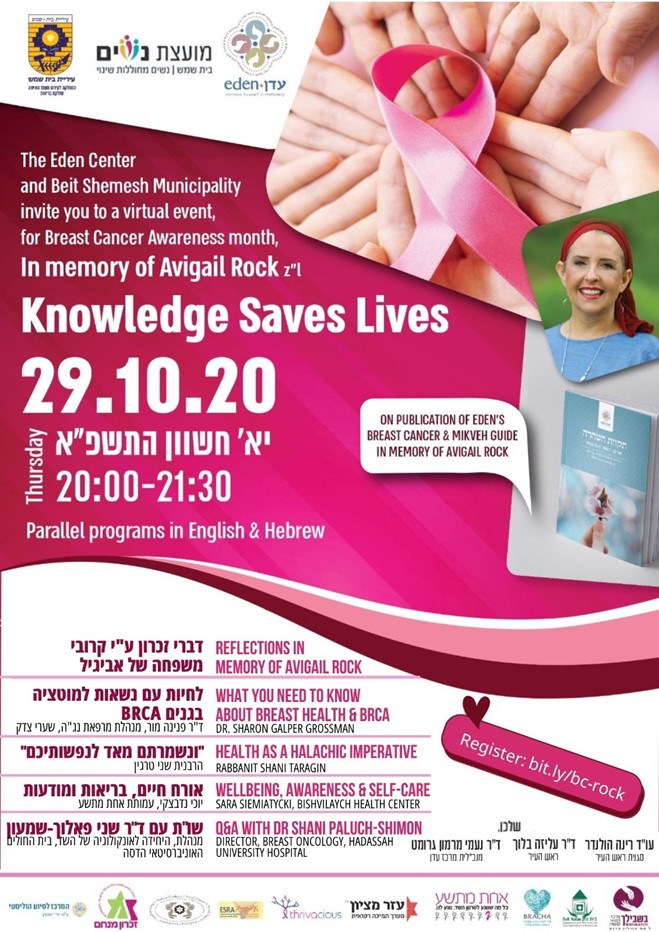 Nechama touches on this point in a very moving way: she talks about her feelings vis-à-vis Avigayil’s illness and role as a mother facing a major change in her own life – her entry into the Israeli army. Military service begins at age 18, and Nechama says that a few days before she was called up, she suddenly realized how sick her mother was. As she entered her basic training period—a tough time for any new young soldier—she kept asking herself: “what am I doing here?” People advised her to pretend as if everything was fine when she visited her mother at the hospital. But, in fact, she felt that her life had been turned upside down. In the army you are constantly being ordered around by other people, being told what to do at every moment, your life is no longer the same as before. On top of that, her mother was ill, so does that mean she is no longer her mother, the mother she knew before? This also brought back memories of how she dealt with the initial knowledge of Avigayil’s illness: the first question Nechama had asked her was whether she would lose her hair, meaning she would no longer be her “original” mother in some sense.

Nechama does not always provide answers or solutions to the feelings and questions she presents. Some of her thoughts leave the viewer, or listener, to try and find their resolutions.

In pursuing the theme of trying to maintain normalcy, Nechama points out the importance of a sense of humor in facing the burden of living with a cancer patient, but also the need to allow oneself to cry. By the way of example of humor, she talks about all kinds of humorous remarks that were written in the family WhatsApp group, even including subjects like blood transfusions. Nothing was hidden or masked.

Transparency was the attitude that the family adopted. The concept of cancer, and its very name, were never hidden by euphemism. Nechama points out that in Israel it is often customary for people to refer to cancer as “the disease”, in the manner of “Voldermort”, whose name cannot be mentioned. Nechama would reply to people who said to her “I heard your mother has the disease”, by saying “let’s just call a spade a spade. Cancer is NOT a pink elephant in the room, which people make believe isn’t there”.

Avigayil went through bouts of cancer. Nechama tells how the second time, when she went to see her in the hospital, she still wasn’t sure how to behave towards her, and what to say, and how. Yet Avigayil, sensing this, stunned her by saying to Nechama that she may have gotten a “pass” from many difficult obligations in her life, but she didn’t get a “pass” on being a mother. So many things had changed in her life—like being taken around in a wheelchair—but some things would never change. Avigayil said it was important to learn to accept, to embrace limitations, and to learn to live with this new reality.

Nechama reiterated a number of times that her family is a “crying family”, this doesn’t deny sadness; when one member of the family starts crying, the others join in. But you can’t cry all the time—you also have to laugh, even at cancer.

Nechama summed up her talk by stressing things that characterized her mother: transparency, openness, and dialogue. She lived in this world. And above all, awareness, which became so important to her.